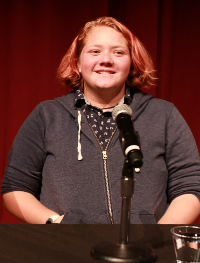 I was 14 years old when I encountered the JQ booth in 2017 at Models of Pride, the world’s largest queer youth conference. It was one of my first LGBTQ+ events ever and seeing a Jewish organization represented in a queer space was super important because I hadn’t connected those two different parts of my identity before.

I started attending the Teen JQSA mixers, saw some familiar faces, and had a really good time in such a positive and relaxed environment. Soon, I was hooked! I began bringing friends to events, and made some new ones along the way. I even met one of my closest friends at the Teen JQSA Retreat in 2018. I also had the honor or being a panelist at JQ’s Today’s Teens: Voices of Queer Youth panel, sponsored by the City of West Hollywood and District 3 Supervisor Sheila Kuehl.

Through these events and connections, I have really learned a lot about myself because JQ provides a unique space of self reflection and socialization. JQ has helped me identify what Jewish values are relevant in my life. In particular, I have realized that as I began to ‘come out,’ the visibility of my Jewish queer role models was invaluable. I have therefore made the conscientious decision to 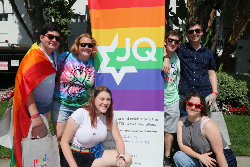 live visibly in an attempt to show others that it's okay to be unapologetically Jewish and queer.

I don’t think my job is to inspire all of the Jewish queer teens in the world, but if I can reach just one - if the way I live can save at least one person - I would be content.

Help me make a difference by supporting JQ today! Your generosity ensures a safe space for teens like me to connect with one another and to connect all facets of our LGBTQ+ or ally and Jewish identities in a healthy way.
Current Month