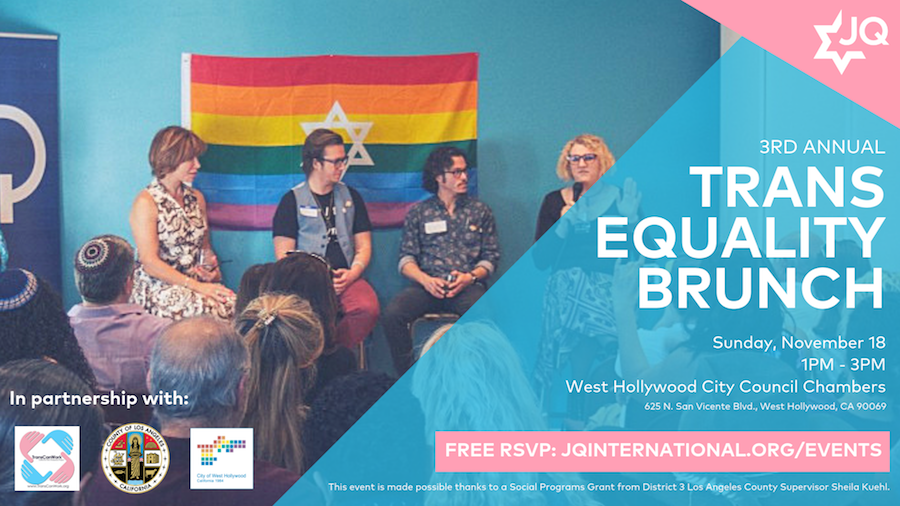 CLICK HERE TO RSVP HERE Threats to the transgender community have never been greater. Join JQ and TransCanWork on Sunday, November 18 from 1-3 pm at the Third

Threats to the transgender community have never been greater. Join JQ and TransCanWork on Sunday, November 18 from 1-3 pm at the Third Annual Trans Equality Brunch for an important and timely panel discussion with members of the transgender and genderqueer community.

Transgender Day of Remembrance, which occurs annually on November 20th, is a day to memorialize those who have been murdered as a result of transphobia and to bring attention to the continued violence endured by the transgender community. At the Trans Equality Brunch, community members will hear the voices, stories, and experiences of diverse and accomplished transgender and genderqueer community members, with hopes of being better friends, family, allies, and supporters of full equality for the entire LGBTQ+ community.

To increase visibility and create awareness of such an important cause, JQ and TransCanWork have gathered an esteemed panel of members of the transgender and genderqueer community to speak about their experiences.

Please join us for food, conversation, and enlightenment at the City of West Hollywood City Council Chambers located at 624 North San Vicente Boulevard, West Hollywood, CA 90069. The event is free with RSVP and includes brunch. Brunch will be from 1 – 1:30 pm, with panel discussion and program from 1:30 – 3 pm.

This community-wide panel event is made possible by a Social Programs Grant from District 3 Supervisor Sheila Kuehl and hosted by the City of West Hollywood.