LGBTQ: The acronym for “lesbian, gay, bisexual, transgender and queer.” Some people also use the Q to stand for “questioning,” meaning people who are figuring out their sexual orientation or gender identity. You may also see LGBT+, LGBT*, LGBTx, or LGBTQIA. I stands for intersex and A for asexual/aromantic/agender. The “A” has also been used by some to refer to “ally.”

Intersex: Born with sex characteristics such as genitals or chromosomes that do not fit the typical definitions of male or female. About 1.7% of the population is intersex, according to the United Nations.

Sex: The biological differences between male and female.

Gender: The societal constructions we assign to male and female. When you hear someone say “gender stereotypes,” they’re referring to the ways we expect men/boys and women/girls to act and behave.

Queer: Originally used as a pejorative slur, queer has now become an umbrella term to describe the myriad ways people reject binary categories of gender and sexual orientation to express who they are. People who identify as queer embrace identities and sexual orientations outside of mainstream heterosexual and gender norms.

Gender identity: One’s concept of self as male, female or neither (see “genderqueer”). A person’s gender identity may not align with their sex at birth; not the same as sexual orientation.

Gender role: The social behaviors that culture assigns to each sex. Examples: Girls play with dolls, boys play with trucks; women are nurturing, men are stoic.

Gender expression: How we express our gender identity. It can refer to our hair, the clothes we wear, the way we speak. It’s all the ways we do and don’t conform to the socially defined behaviors of masculine or feminine.​

Transgender: A person whose gender identity differs from the sex they were assigned at birth.

Cisgender: A person whose gender identity aligns with the sex they were assigned at birth.

Binary: The concept of dividing sex or gender into two clear categories. Sex is male or female, gender is masculine or feminine.

Non-binary: Someone who doesn’t identify exclusively as female/male.

Genderqueer: People who reject static, conventional categories of gender and embrace fluid ideas of gender (and often sexual orientation). They are people whose gender identity can be both male and female, neither male nor female, or a combination of male and female.

Agender: Someone who doesn’t identify as any particular gender.

Gender fluid: Not identifying with a single, fixed gender. A person whose gender identity may shift.

Gender non-conforming: People who don’t conform to traditional expectations of their gender.

Sexual orientation: How a person characterizes their sexuality. “There are three distinct components of sexual orientation,” said Ryan Watson, a professor of Human Development & Family Studies at the University of Connecticut. “It’s comprised of identity (I’m gay), behavior (I have sex with the same gender) and attraction (I’m sexually attracted to the same gender), and all three might not line up for all people.” (Don’t say “sexual preference,” which implies it’s a choice and easily changed.)

Gay: A sexual orientation that describes a person who is emotionally or sexually attracted to people of their own gender; commonly used to describe men.

Lesbian: A woman who is emotionally or sexually attracted to other women.

Bisexual: A person who is emotionally or sexually attracted to more than one sex or gender.

Pansexual: A person who can be attracted to all different kinds of people, regardless of their biological sex or gender identity. Miley Cyrus opened up last year about identifying as pansexual.

Asexual: A person who experiences no sexual attraction to other people.

​Demisexual: Someone who doesn’t develop sexual attraction to anyone until they have a strong emotional connection.

TSER created the Gender Unicorn in 2014 to help describe the spectrums of gender, expression, and sexuality. It has been used in K-12 schools, colleges, and universities across the world as a helpful tool for all ages in understanding an indivduals own gender, sexuality, and expression. 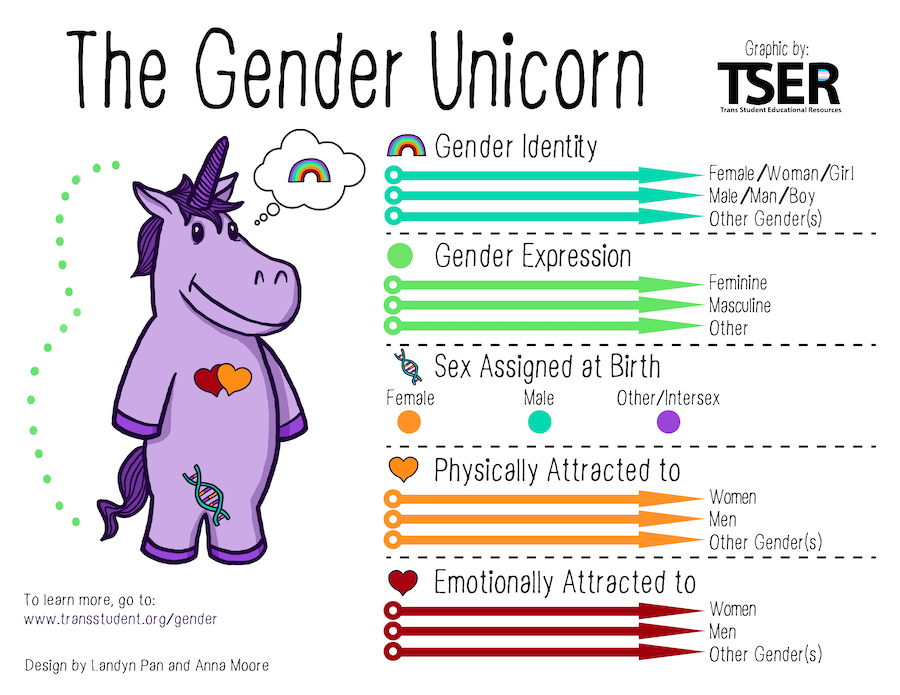 March with JQ in the WeHo Pride Parade! 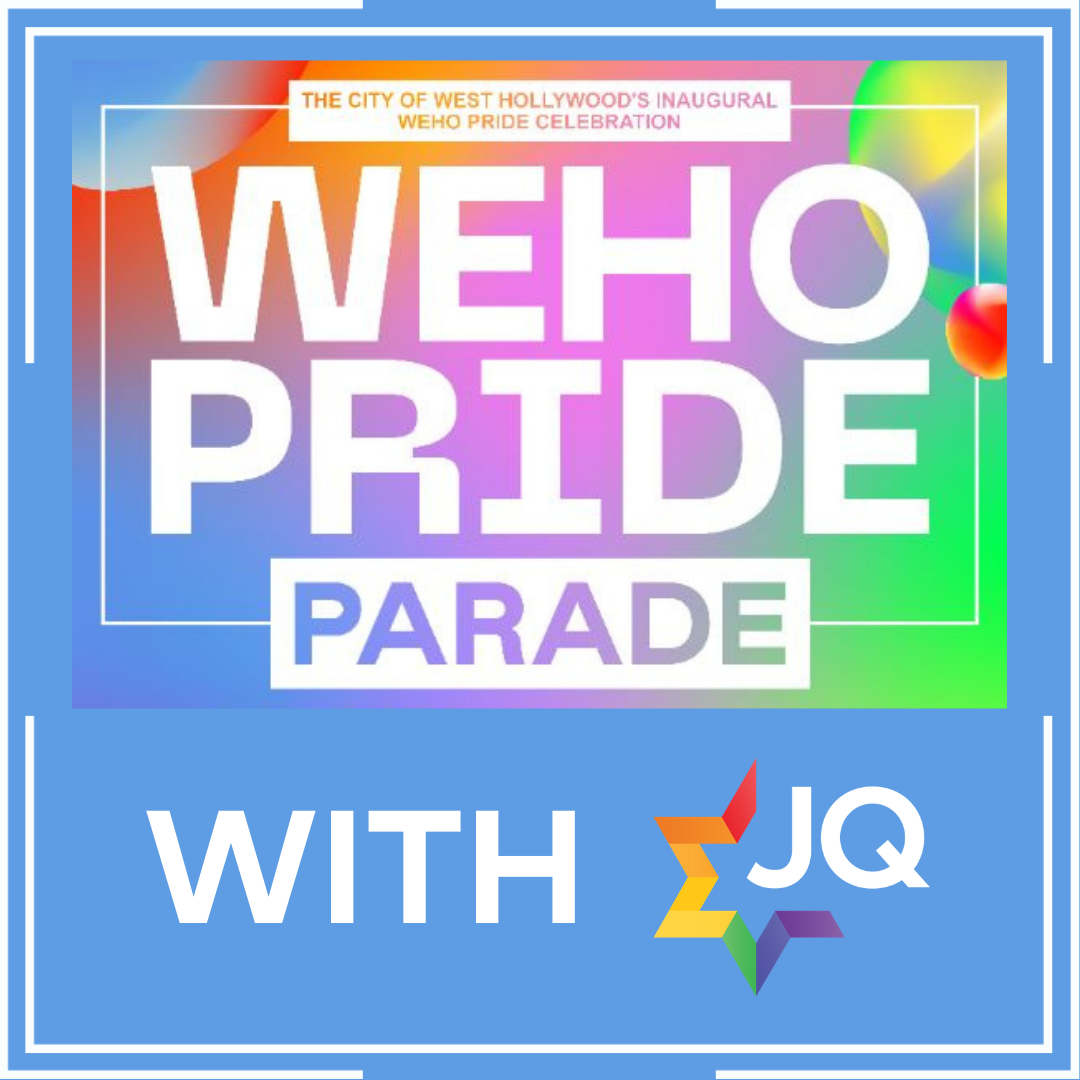 March with JQ in the WeHo Pride Parade down Santa Monica Blvd! Make a sign, help decorate our float, show your Jewish Queer Pride, and meet up with

March with JQ in the WeHo Pride Parade down Santa Monica Blvd! Make a sign, help decorate our float, show your Jewish Queer Pride, and meet up with other LGBTQ+ and ally Jewish teens, adults, and families!

To sign up to march in the parade or purchase tickets to any of JQ’s Pride offerings for the month of June, click here! 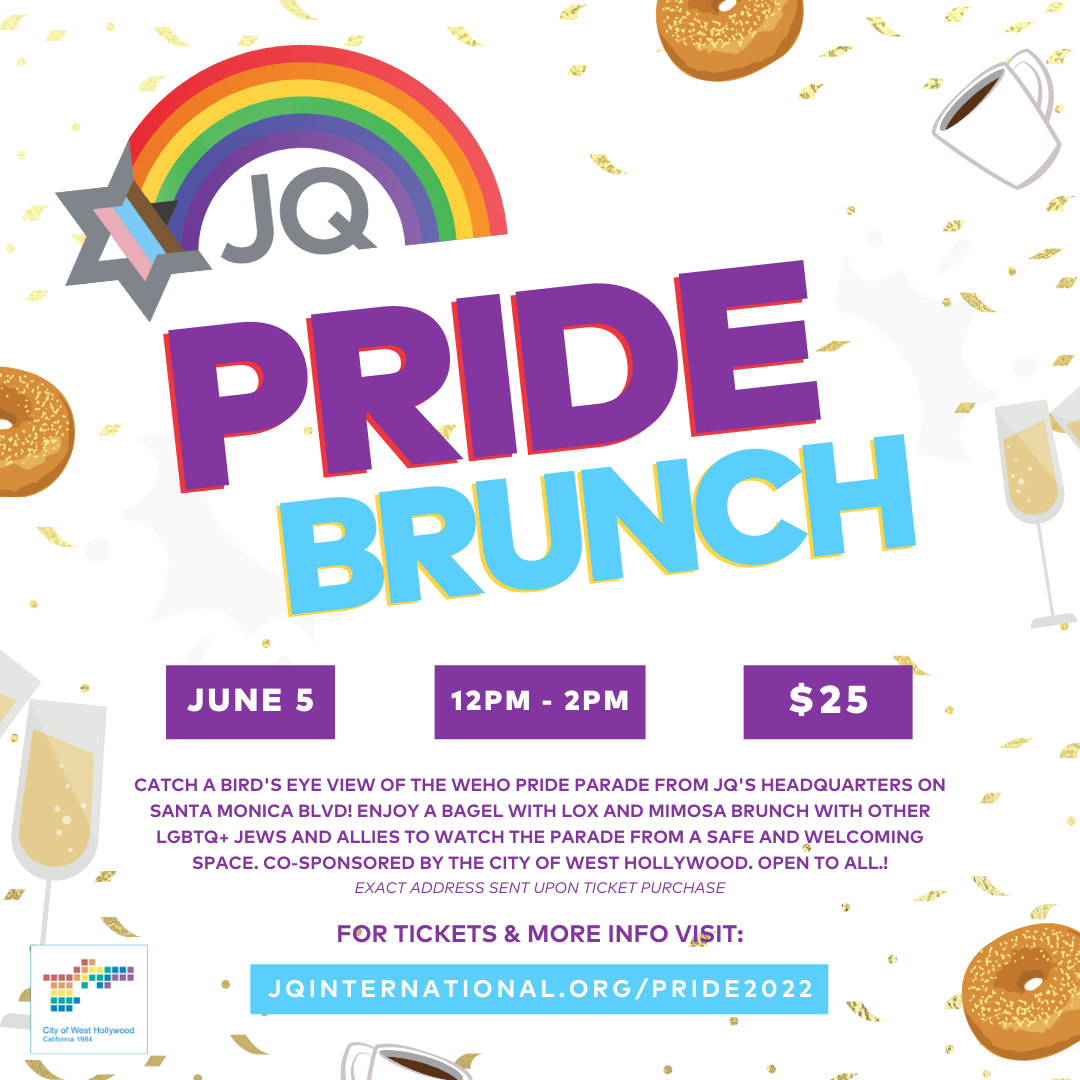 Catch a bird's eye view of the WeHo Pride Parade from JQ's headquarters on Santa Monica Blvd! Enjoy a bagel with lox and mimosa brunch with other LGBTQ+

Catch a bird’s eye view of the WeHo Pride Parade from JQ’s headquarters on Santa Monica Blvd! Enjoy a bagel with lox and mimosa brunch with other LGBTQ+ Jews and allies to watch the parade from a safe and welcoming space. Co-sponsored by the City of West Hollywood. Open to all.

To purchase tickets for JQ’s Pride Brunch or any of JQ’s Pride offerings for the month of June, click here! 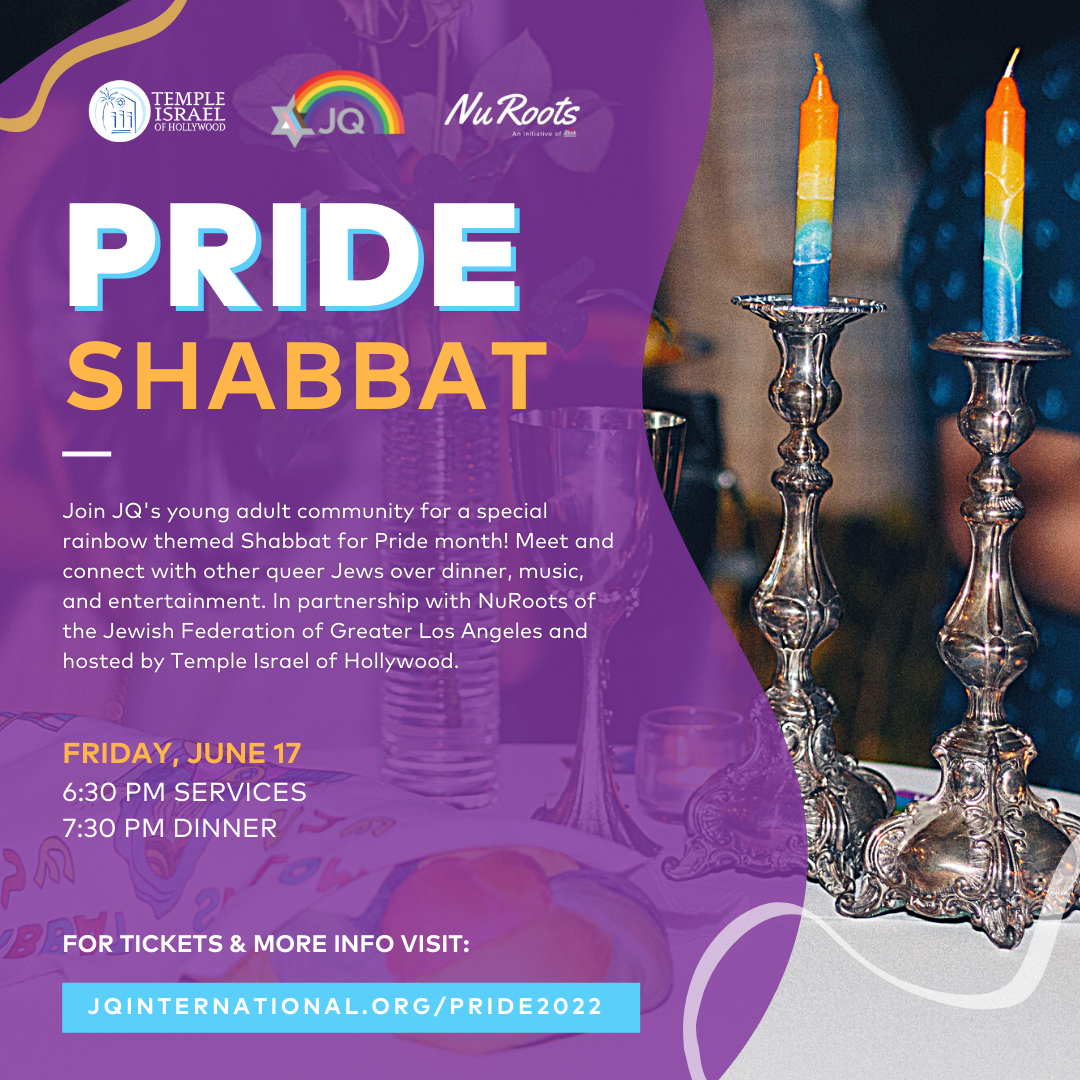 Join JQ's young adult community for a special rainbow themed Shabbat for Pride month! Meet and connect with other queer Jews over dinner, music, and entertainment. In partnership

Join JQ’s young adult community for a special rainbow themed Shabbat for Pride month! Meet and connect with other queer Jews over dinner, music, and entertainment. In partnership with NuRoots and hosted by Temple Israel of Hollywood.

To purchase tickets for JQ’s Pride Shabbat or any of JQ’s Pride offerings for the month of June, click here!